Why Tower of Fantasy is More than a Genshin Clone 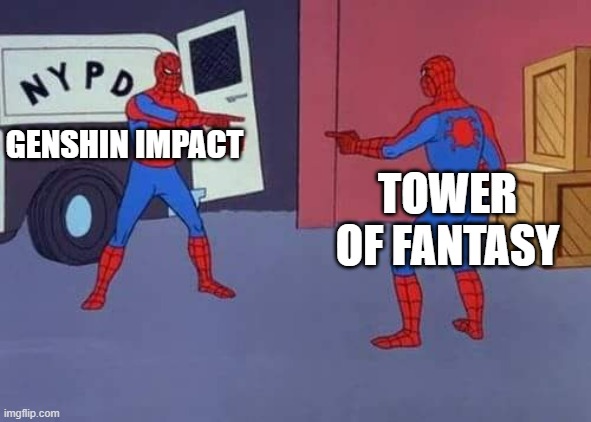 They say that imitation is the highest form of flattery. It’s seen in fashion, where icons can influence what’s vogue and what’s not—yet plagiarism is one of the worst offenses in the intellectual property domain. Then again, that’s copy-pasting things wholesale and claiming that it’s yours when it’s really not. People follow trends but also put their own spin on them.

That’s why some Genshin Impact fans are wary of Tower of Fantasy. As an open-world MMORPG, many designs and gameplay choices seem lifted from the former. However, ToF has unique mechanics that make it different from Genshin; they put their own spin on the familiar mechanics and features of the RPG genre.

Where Tower of Fantasy Stands Out

As much as Genshin tries to switch it up with different mechanics per character, Tower of Fantasy does it with weapons. While the former only has 5 weapon types to play with, the latter has a whole arsenal. Aside from the usual swords, spears, and bows, it offers cannons, guns, chakram, and even a scythe! While weapons of the same kind have similarities, they have unique effects and styles that make every armament different.

Another thing that stands out for is the aerial combat. In Genshin Impact—aside from Xiao—no character can continue pummeling the enemy mid-air. Even then, Xiao can only land three hits before he has to hit the ground again. What’s more, when you get knocked into the air, you have no way to recover and no way to dodge hits from mid-air.

In comparison, Tower of Fantasy makes aerial combat an art form. The only limit is your stamina; mid-air attacks use it up, so you can’t go at it forever. Still, it’s a mechanic players take advantage of to dodge ground attacks while remaining on the offensive. The visual effect can make it a bit chaotic to look at, but it’s also exhilarating to watch the numbers fly. Dodging in this game has its own bar separate from your general stamina, which means you can do it to extend your aerial time a bit.

From the beginning of the game, players can double jump in Tower of Fantasy. That fact already puts it ahead of Genshin since only one character can do it in that game (Kazuha). The Jetpack relic adds verticality because it can be used as a ‘high jump’ ability. It uses up a charge that takes about 100 seconds to return, though. Nevertheless, it’s a valuable mechanic in exploration.

Genshin might have a Cavalry Captain, but it’s been two years, and we haven’t seen a single horse in the game. Tower of Fantasy gives you various things to ride to make traveling faster—including vehicles. Your first one would probably be a motorcycle, but other options include:

The very fact that you can do this makes exploring so much easier than in Genshin. Then again, the other game’s environments would slow players down to take in the sights. In contrast, ToF’s environment design doesn’t invoke the same feelings.

Aside from the above vehicles, one last transportation method you can use in Tower of Fantasy is the Jetboard. It lets you zoom through the open world almost indefinitely, but you must avoid bumping into things. As a relic, it has about a minute’s cooldown before you can use it again, but having it as an option is better than having none.

Genshin’s mobility relies on having specific characters. The Traveler, Venti, Kazuha, Zhongli, and Albedo handle vertical traversal. Yelan, Sayu, Ayaka, and Mona handle horizontal traversal. Out of all of those, only the Traveler and Sayu are the characters that are easy to get; the rest are limited 5-stars, except for Mona, but the chances to get her can be small.

Genshin is primarily a solo game with co-op aspects, while Tower of Fantasy is a full-on MMO. Seeing other players interacting in the world with you is something you don’t experience in Genshin unless you leave your world open.

There’s a world chat in ToF where you can see players recruiting to fight world bosses or do a Joint Operation. It’s refreshing to see in contrast to the silence in Genshin unless you have chatty friends.

Where Tower of Fantasy Falls

Genshin Impact starts out strong, giving the players the primary motivation of the player character from the start. That gives the player purpose from the get-go, and they have a goal beyond whatever is happening where they are right now.

In Tower of Fantasy, the player character is an Executor who had their memories wiped while their skills remained. Then you’re given the mission of chasing the NPC that saved you as he tries to keep his only family left. The memory wipe is handwaved as the company you worked for doesn’t exactly have the means to give it back.

The characters are pretty flat as well. They trust the player character because another character does, or your avatar does something for them. Some characters are even written off almost as soon as you meet them. You don’t have enough time to get to know the NPCs before you move on to the next area and meet new ones.

Genshin gives every character they release a specific backstory and roles outside being the Traveler’s companion. This gives them more life and adds to the player’s attachment to them. Getting a new character in Tower of Fantasy only means getting a new weapon and nothing beyond that.

There are character stories in Tower of Fantasy, but they only provide a small piece of their backstory. Moreover, there isn’t a story for everyone on the roster, just a handful.

The graphics in Tower of Fantasy are okay, but as mentioned in the mobility section, it never gave me a sense of awe. I haven’t found a location I want to take a picture of in Astra. I haven’t seen anything that made me stop and look at the view in Banges.

Contrast that to the detailed and deliberate environmental sets in Genshin. I remember seeing the Luhua Pool for the first time and thinking, ‘that looks so pretty.’ I’ve taken pictures of the night sky and other locations in Teyvat. And since the areas are so distinct, I don’t need to look at the map to know where I am.

Then there are the animations. Some of ToF’s character movements feel lifted straight from Genshin Impact, but the original is still better. They didn’t do anything to improve or change things, so it wouldn’t be apparent. Animations are a bit off, especially climbing. In combat, the actions get covered up by battle effects, but it doesn’t have any personality.

Genshin characters have their own quirks, even when using the same weapons. Fischl flips her hair, and Yelan kicks her bow as part of their normal attack animations. Eula’s dance-like moves completely differ from Diluc’s solid and efficient strikes. Mona’s normal attacks have a star theme, contrasting with Barbara’s musical ones.

You can see the care and lovingly detailed effort Hoyoverse put into designing their characters. On the other hand, Tower of Fantasy has generic animations that should fit any player-designed character.

PvP isn’t a downside as healthy competition between players can make the game fun, but that all goes down the drain when cheaters and hackers take the easy route. Unfortunately, Hotta Studio doesn’t have an excellent track record in fixing bugs and patching holes.

Hackers dominate the rankings and use duplication bugs among other exploits, and the devs are doing nothing about it. Some players have Suppressor upgrades that aren’t available in the game yet—that’s a big red flag in the competitive scene. As a result, others who are actually playing the game ToF fairly are taking a hiatus until these get fixed. It breaks the game, and players will not stand for a cheating community.

Each song in Genshin’s soundtrack is one I can listen to again and again. They fit the situation it was composed for and use the relevant instruments from the country of inspiration. Tower of Fantasy’s music is… not that. It’s easy to tune out, and nothing stands out from the others. It doesn’t really add to the atmosphere of the game—it’s like it’s just there to be there.

It’s easily overlooked, but some players take it seriously. Sure, you can just mute it and play the music you’d like to hear. Still, the fact that you’d do the latter instead of listening to the game’s music is a sign—you won’t need to find a substitute if something is good enough.

I’m having fun playing Tower of Fantasy, though I’ve only been exploring and not doing the co-op stuff (yet). There are things to enjoy, but for now, I think Genshin Impact is the better game between the two.

It’s a more satisfying game with thought and deliberation put into every feature and activity. Tower of Fantasy is a mishmash of activities and mechanics, but it’s like the developers didn’t really think about how things work and fit together. It’s very evident in combat. Genshin’s 4-character teams build up on each other through buffs or elemental reactions. Tower of Fantasy’s weapons primarily operate individually, so they don’t really interact with each other. There’s no real reason you should use one over another, unlike the teams in Genshin where it matters who you put in it.

I’d play Tower of Fantasy, but I wouldn’t be putting too much effort into reaching the endgame or figuring out the meta. It’s just something I’ll play to pass the time while waiting for the next patch of Genshin or when I have nothing else to do. But who knows? My thoughts about Tower of Fantasy might change when it gets more updates.