The Toxicity of a Pro-Player Wannabe

When outstanding plays in a certain match were seen by thousands of players made by the people who have played in the pro-scene, normal players try the things they’ve done using that hero. This matter is a very serious issue when normal players tried playing it but failing and the worst effect is when they’re failing on ranked matches.

It’s very alarming that these types of players are trying so hard to be a “Pro-like” Dota 2 player, but failing too much and ending up blaming their own team mates without doing anything bad at all. Since Dota 2 is a team game, one player who can’t participate well is a huge loss especially on team fights.

Dealing with the Negativity of Toxic Players

Playing with players who demands a lot, stand as the commanding position of your team, toxic against enemies and team mates and blaming team mates even if the mistake is done by them are very cancerous, and dealing with these kinds of people is not an easy thing to do. It’s either you do your own thing to win the game or go on full-retard and hit each other with words on the chat box. 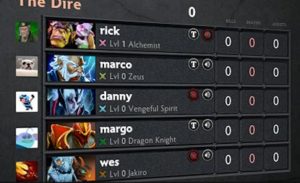 To deal with these kinds of people I simple mute them and play the game. Mute everyone, it works. Muting them will not make any harm against the game. In this case all you have to do is to trust yourself especially if you’re playing the carry role. I’ve done this many times; there are instances that our team won the game because of my pushing skills which helps a lot to gain advantage of the game. Exchanging your role to kill enemy heroes to pushing and destroying lane towers and barracks is better than participating in team fights but getting killed first because of carelessness or stupidity.  By muting their filthy chatting words, you can focus even more in playing.

If you win the game with your personal instincts and without relying on your toxic teammates, it’s a great thing. It’s okay to lose after trying to win the game. You’ve done your best part in trying to play the match.

As you build Dota 2 Items to fight your way to victory not only against your enemies but with your toxic allies, you’re skill will surely improve once you won the game your way. You didn’t go full retard in bashing each other’s head in the chat box but you make a way to win the game instead. +25 MMR for you as your reward. But it’s not always effective way to win. Remember that it’s an essential that teamwork is present in the team and dealing with toxic players is just another headache. Find yourself a way to get out of these kinds of players and this will definitely train to get a better attitude.